I like Granger Smith.  I like him for many reasons, but one of them is the fact he's this guy who's always out there somewhere making a good song.

Being fair, he's not top of mind for many, and has not reached the summit that others have, not yet anyway. But his fans love him and his live shows. I am a fan for the same reasons, but also in the fact that he chooses good songs, that say something.  I always like it when songs say something that wasn't said in the song that just played before it. Or it is said differently.  Good words, and feel, can cut through like a great melody.

Backroads Song  - I hope we play this one for 25 years!

I also feel that his singles are easy to listen to. They flow, they have a feel, they take you some place, and you believe it.  To me, the believe-ability of a song, and the artist together is crucial.  There are many good songs, and many good singers, but sometimes you don't believe the marriage of the two. You can sense when it's a forced deal. You can also feel when the artist has been there and knows what he or she is singing about.  I hear that in Granger Smith.  He knows who he is....I like that in an artist.

(Photos from the generosity and extreme talent of Justina Bucceri) 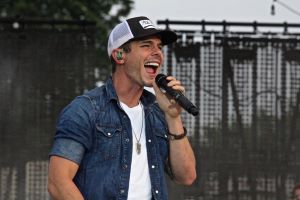 I also like rooting for the underdog.  Does he qualify? I guess technically yes, but only in some senses.  To me, his music is stuff of anything but.  I'm a fan...

More in this category: « WYNN QUOTES - We Get There Better LOCAL FUNDRAISING - Go To A Fish Fry!! »
back to top