WYNN - Who The Heck Was Bob Gibson?

Over the weekend, Bob Gibson died at age 84.  For those of you who don't know exactly who he was, he was a pitcher for the St. Louis Cardinals in the 1960's and 1970's.  When you read about him, and take time to learn who he was, and what he did within the game, he just may be the best "overall"  player in the history of the Major Leagues.  He also without question was the most feared pitcher in MLB history.

Yes, we can talk about his stats, but that alone is too easy.  His run through the 60's and his 1968 season changed baseball forever.  In 1968, he was 22-9 and had a ERA of 1.12.  (Somehow, he lost 9 games) He was MVP and everything else that year.  And as a result of his dominance, baseball lowered the mound so hitters could have a better chance.  And it's still that low.  He is the only player I can think of that by himself, forced a geometric design change to baseball forever.  The game has been forever changed as a result.  He was a more modern day immortal of the game.

Indulge me here briefly.  251 wins, 56 shutouts, over 3,000 strikeouts, 9 straight gold gloves, 255 complete games, 13 shutouts in a single season, MVP, 2 time World Series MVP, 3,900 innings pitched and a seven game World Series win streak. 9 time All-Star, and in one World Series, he won 3 complete games in a week!  He once struck out 17 in a World Series Game! He also hit 26 home runs in his career (pitcher) and hit .303 in 1970.  He was a multiple World Series Champion, and he would pinch hit and pinch run too.  He is without any question the best Post Season starting pitcher ever. A guy like that today would demand 60 million a year. - And get it!  (His highest salary was $150,000 - highest in majors at the time) 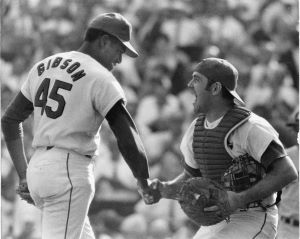 He played his entire career with the Cardinals and was the face of that franchise long after he retired.  A beyond fierce competitor, and also a great man off the field.  Guys like Gibson are once every hundred year guys. Players that show up and impact the game so incredibly, the game is never the same. The list is short.  Babe Ruth, Jackie Robinson, Hank Aaron, Roberto Clemente, Bob Gibson. Ruth changed the game with the advent of the Home Run. Robinson, with skill, bravery, grace and complete social change, Aaron with our first look of total greatness, Clemente with his greatness and opening a huge door for Latin American players to enter the major leagues, and Gibson being so great and dominant, the game had to evolve and adjust to him.

You may not know about Bob Gibson, and that's OK.  He like many, was a different time and a different era that is easily disposable today.  But that doesn't make him less great.  I think if I was starting a team that wanted to win a World Series, and I could take that one player to start my team, with due respect to all the great players of today, and 150 years of yesterdays, my pick would be Bob Gibson.

He was everything real greatness should, could, and can be.

More in this category: « WYNN - Wynn At The Movies And Info! WYNN - Rediscovering Mapleside Farms! »
back to top